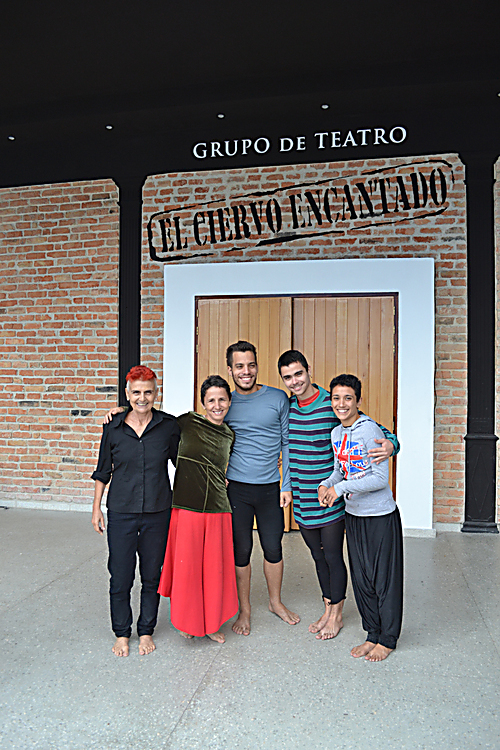 The company outside the newly renovated theatre

After eighteen years without a base or performance space, Cuba’s prestigious Enchanted Stag theatre company finally have a venue to rehearse and perform thanks to support from the Music Fund for Cuba.

The Enchanted Stag theatre company was formed in 1996 by students at the country’s Higher Institute of the Arts (ISA) and has gone on to become one of the islands most respected theatre companies, winning national and international awards and touring in Latin America.

Despite receiving artistic accolades, like many arts organisations in Cuba the company suffered from limited resources: “For the first eleven years of we rehearsed in a classroom at ISA, and then for a further eight years we found space in a dilapidated building which didn’t even have a toilet,” says Nelda Castillo, actress founder and current director general of the Enchanted Stag Company.

The new theatre venue, situated in Vedado on 18th Street between Linea and 11th streets, took six months to renovate, with the company involved in designing the rooms and helping in the rebuilding work too.

“Now we have a great space for performances which will also be used by other community organisations and groups, a dressing room, storage space for props, an office and a toilet for the first time in 18 years,” explains Nelda.

The flexible space has room for 122 raked seats, 150 for children’s shows when kids also sit on cushions on the floor, and 300 for flexible performances in the round. Admission, as with all arts in Cuba is subsidised. Tickets cost 5 and 8 Cuban pesos for children and adults, roughly equivalent to 12 and 20 pence.

When the Music Fund for Cuba visited the theatre in May the company were in final dress rehearsals for their very first show in the new space, timed to coincide with the country’s annual May Theatre Festival – Mayo Teatro.

‘The Elephant that was Too Big’ is a children’s show that like many of the company’s performances encourages audience participation and have won the public’s approval not only on the island but in Colombia, Mexico and Canada where they have also toured.

Their work focuses on memories and often draws on Cuban literary, historical, artistic, musical, and dance traditions, rather than straight performances by playwrights. Their inspiration is the Cuban spirit and their work looks at aspects of Cuban society “exploring the peculiarities, richness and contradictions of the Cuban culture identity in the deepening of the nation’s origins.

The Music Fund for Cuba’s contribution to the restoration was the nine air conditioning units positioned around the ceiling in the new theatre. “It might seem like a small thing,” said Nelda, “but it makes a massive difference in so many ways.”

“With the Cuban heat, especially in the summer, it becomes unbearably hot to rehearse. And as far as audiences go: ‘Do you have air conditioning?’ is one of the first questions we get asked. People stay away if you don’t have air conditioning as it’s too hot to watch the shows when the theatre is full.” “But now it’s great,” she smiles. “Thanks to the Music Fund, now we have air!”