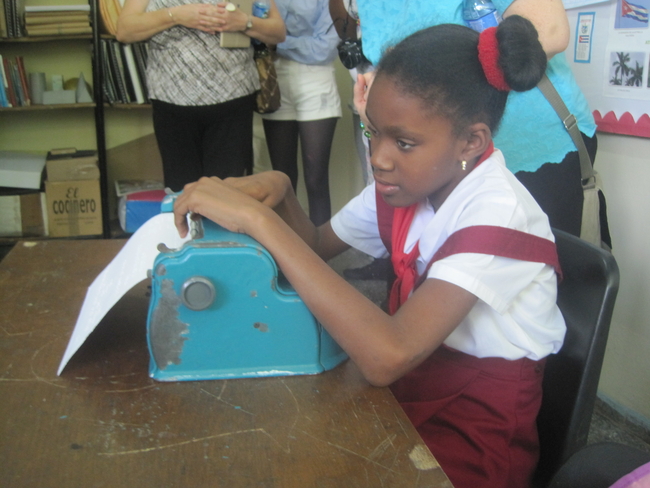 Members of the National Education Union (NUT division), in association with the Music Fund for Cuba, have raised more than £5,000 to send refurbished braille machines to special needs schools in Cuba. Although Cuba has an excellent network of schools for blind and visually impaired children, the US blockade causes many shortages in these schools.

Materials and equipment often have to be sourced via third countries at inflated costs. Braille machines which can make an enormous difference to a child’s life can cost up to three times as much to buy.

The appeal has now raised enough to provide Braille machines - refurbished by students from the Royal National College for the Blind in Hereford - to schools in all of Cuba’s fifteen provinces.

An NUT delegation visited one of the institutions which will benefit from the appeal in 2017. The Abel Santamaria School, which occupies the site of an old army barracks in Havana, provides specialised care for 145 students aged between 4 and 14 years old; 47 blind children, 8 deaf and blind and 90 with a visual impairment.

There are 64 teachers, including speech therapists and psychologists, and classroom assistants. some of the teachers are also visually impaired.

UNICEF estimates that nearly 10,000 children with disabilities study in mainstream schools in Cuba. Schools such as Abel Santamaria are designed to serve as a transition towards integration into mainstream education. Children are also taught how to read and use Braille machines, and everyday life skills and hobbies, from cooking to carpentry and playing sports to learning a musical instrument.

The computer classroom includes some specialist computers, software and Braille printers provided by the Cuba solidarity Campaign and Music Fund for Cuba. Previous appeals have bought speaking watches and calculators and provided educational equipment and instruments for the art and music rooms.